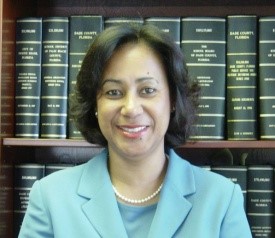 Deborah Mordecai Edwards has been a practicing attorney since 1977. She was admitted to Practice in Jamaica in 1977, and in the State of Florida in 1991. Deborah started her legal career in Georgetown, Guyana with the Caricom Secretariat, Harmonization of Laws Unit, where she worked on the drafting of model company’s, patents, trademark and copyright laws for the Caricom Region.

Deborah has negotiated and documented loans and trade finance in the hundreds of millions of dollars for Jamaica with the World Bank, the U.S. Ex-Im Bank, and with the governments of the United States of America, Japan, Israel, Italy, Norway, Switzerland, France, Germany, Hungary, Colombia, Cuba, Venezuela, Argentina, Panama, Libya and India.

Deborah has negotiated, documented and closed financing for the purchase of ships, military and civilian aircraft, public transport, oil, and agriculture and has negotiated project financing for road and highway construction, water and sewage infrastructure, power plant retrofitting, and acquisition of portable power barges. She was part of the team that negotiated Jamaica's reinstatement under the San Jose oil financing facility with Mexico and Venezuela.

She designed the legal framework for a US $100 million revolving short term trade financing facility between the United States Export-Import Bank and Jamaica and the financing participations of 12 United States Banks and 13 Jamaican Banks. She advised on Government investments and strategies for the privatization of companies owned by the Government of Jamaica, including the sale of hotels, stock in the National Commercial Bank, the Caribbean Cement Company, Jamaica Steel Mills and commercial real estate in New York and London. Deborah has worked on sale and lease back transactions, asset sales, forward sales of receivables, swaps, syndications, participations and many other financing transactions.

Deborah has extensive experience in commercial and residential real estate transactions and in the acquisition and financing of affordable single-family housing and multifamily rental housing. Deborah has represented developers in the development of affordable single-family homes funded by various government loan programs and in the acquisition of land for commercial and mixed-use developments.